First check out my video of my New York Trip!

We woke up to what looked like an apocalyptic view of Manhattan. The winds were roaring, the skyscrapers just a couple of blocks a way were barely visible, and everything was covered with a thick layer of snow.

Getting dressed that day took longer than usual with all the layers, but as soon as were done we were out to embrace the storm!

We spent the morning (and by we, I mean “I”) rolling in the snow, throwing snow balls at each other and being amazed by how beautiful it all was.

Playing with the snow helped us work up an appetite, and at Oboa, we stuffed our faces with delicious food. If you ever find yourself there, don’t miss out on their kimchi fries! I can still hear their crunch with every bite!

Much later at night, the storm was beginning to calm down, so we went out across the street for food and beer before we walking down to times square. There, under all the flashing lights, something extraordinary was happening. Snow fights, snowman building, and other winter activities were taking place in the middle of streets. We even met a guy skying on the empty and snow covered roads of New York!

The city’s never shut down before, which made this a once of a lifetime experience.

The next day, the view from our room at the Courtyard by Marriott New Central Park was breathtaking. The sun was out and everything below us was white!

We hurried to central park for a day of fun in the sun, and it seemed like everyone in NY had the same idea. The park was covered with snow, families, couples and friends. Everyone was out in the sun enjoying the spectacular scenery.

On the hills, kids and kids at heart, were racing down on their sleds, some falling others barely moving, but everyone was definitely happy. I couldn’t resist the temptation, so when I was generously offered a turn on a plastic container top turned sled, I happily accepted!

Hot cocoa in our hands we strolled through the park, snapping pictures and playing around, while trying to make our way in the snow.

Dogs, squirrels and other animals came out to play too!

There’s something special about snow that makes everything look magical.

New York with nothing but snow all around, is a sight to remember forever.

See you soon New York… You’ll always have a piece of my heart!

Get To Know Me 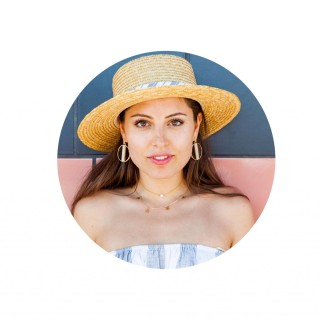 My name is Tamara Smith, and I’ve been in love with fashion since I was 3 years old and stealing my mom's heels. I have a degree in interior design and a background in photography. To me, fashion is the ultimate tool of self expression & creativity. On my blog, I’ll share everything that has to do with mode, my lifestyle & more.